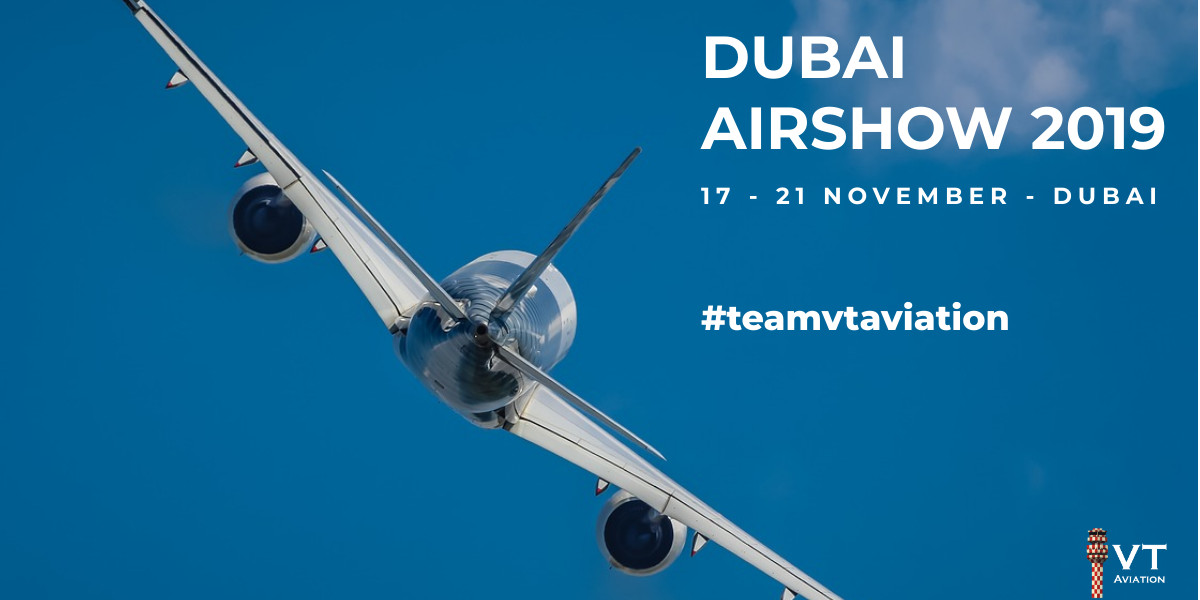 Dubai Airshow 2019 (#DAS19) – one of the most anticipated biennial airshow event opens on Sunday, November 17th. The event will take place at the Dubai Airshow Site, DWC in Dubai. The airshow will bring aviation manufacturers, leading airlines, and others related businesses together to share announcements about their latest products. Team VT Aviation will be attending the event and will be reporting live about the happenings from the event.

The Dubai Airshow 2019 will feature up to 165 aircraft on display from the entire aerospace industry. The static display will include latest civil, military, business aircraft, and a collection of helicopters from the leading industry manufacturers. Here’s what we can expect to see at Dubai Airshow 2019 –

The middle eastern aviation giant Emirates will be showcasing their ultra long range Boeing 777-300 aircraft (in the Opportunity – Orange theme of EXPO 2020), an Airbus A380 (in the Mobility – Blue theme of EXPO 2020), the Airbus Corporate Jet A319-115. In addition, the Emirates Training College’s Embraer 500 Phenom 100EV and Cirrus SR 22 aircraft will also be a part of the display. Etihad Airways will be showcasing their Boeing 787-9 Dreamliner product.

Aircraft manufacturer Airbus will be showcasing aircraft all the way from an A319 to an A400M. The following commercial aircraft are expected to be at the airshow –

Furthermore, on the military front, Airbus will be showcasing the –

Boeing, on the other hand, will be displaying their Boeing 787-9 Dreamliner (N1015B) in the recently painted “Dreams take flight” colours. This is one aircraft we are excited to see and get some great pictures. Boeing will also be displaying the CH-47F Chinook Helicopter.

Embraer S.A. will be showcasing their E195-E2 Jet most popularly known as “Profit Hunter” in the Tech Lion livery (PR-ZIQ). They will also be displaying the Phenom 300E, Legacy 450 Jet, and other corporate jet variants. The KC390 (FAB2853) is also expected to make its presence at the show.

In addition, the following aircraft are expected t0 be at Dubai Airshow 2019-

This list is looking great and we can’t just wait any longer to head to the airshow venue and capture these birds on our cameras.

The airshow will feature the flying display every afternoon between 2 PM – 5 PM. Besides being the eye catcher of any airshow, the flying display is an impressive way for manufacturers to demonstrate their aircraft abilities to the global aerospace industry as whole.

We’ll be covering the flying display and sharing them on our social media channels. Get ready to watch the action!

The aerobatic displays will be from –

On the defence side, the aerobatic displays will come from –

Air Race E, a pioneering electric air racing series headed by international air racing promoter Jeff Zaltman, is set to unveil the world’s first electric race plane at the Dubai Air Show. The plane will be unveiled on a static display in association with the series’ Official Founding Partner, Airbus, on the first day of the airshow.

The Russian Helicopters Holding Company (part of Rostec State Corporation) will make the first foreign presentation of its newest Mi-38 civilian helicopter. The rotorcraft featuring a luxury cabin will be showcased at the static exposition, and will also take part in the flight program.

Introduction of the light ANSAT Helicopter

The Russian Helicopters Holding Company will also be introducing the light ANSAT Helicopter into the Middle East market. Earlier in June, the aircraft made its European debut in Le Bourget (#PAS19). The corporate version of the rotorcraft will take part in the flight program of the show.

What are your expectations from #DAS19? How do you see this year’s event going forward? Drop in your comments below. If you are at #DAS19, let’s meet up over a cuppa’ coffee!

Check out the album from Dubai Air Show’s Day 1 here:

Trip Report: Manchester to Mumbai with Qatar Airways
Dubai Airshow 2021 (#DAS21)
A fully vaccinated crew? Here's what this airline is up to!
Spread the love
Tweet